Re-imagining democracy is a research and network-building project, begun in 2005 by Joanna Innes and Mark Philp. 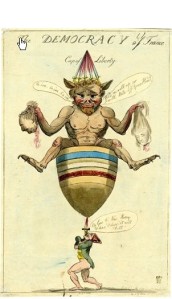 The Re-imagining democracy project charts the transformations in the ways in which people thought about democracy in the years between the American Revolution and 1848. In the mid-eighteenth century, ‘democracy’ was a word known only to the literate. It was associated primarily with the ancient world and had negative connotations: democracies were conceived to be unstable, warlike, and prone to mutate into despotisms. By the mid-nineteenth century, the word had passed into general use, although it was still not necessarily an approving term. In fact, there was much debate about whether democracy could achieve robust institutional form in advanced societies.  The project began looking at the very different trajectories followed by America, France, Britain and Ireland in the interpretation and uptake of democracy in the period, and has broadened to encompass the Mediterranean under a Leverhulme Network Grant. In future the project intends to focus on developments in Northern and Central Europe.

The initial phase of the research involved a series of workshops and a conference, and resulted in a collection of essays Re-imagining Democracy in the Age of Revolutions.

The current major phase of the project is Re-imagining Democracy in the Mediterranean.